A Tribute to Martin Luther

It’s always a bit awkward to celebrate someone who truly doesn’t want to be celebrated.

Yet, we do it anyway.

Martin Luther was one of those don’t-look-at-me types. Like John the Baptist or Saint Paul, he would much rather see the spotlight shining brightly on Christ, while he himself fades into the background.

As we approach Reformation Day, we can’t help but give him his 15 minutes. He did, after all, give us his 95 Theses.

A few words is the least we can do.

So how do we know that Luther wouldn’t have wanted all of the hoopla and fuss? From castle church door to deathbed, his track record says it all. 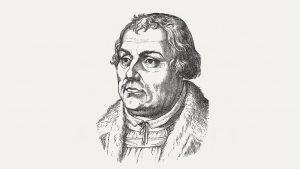 While Luther was bold, brave and boisterous, he certainly didn’t set out to start a revolution. It wasn’t about him or his ideas. It was about Jesus. It was a return to Scripture. He was constantly pointing to God’s Word, even painstakingly translating the Bible so that it could be read and understood by common people. He only wanted people to see Christ, and Luther would be horrified to have the Reformation remembered in any other way.

2. He would balk at the name Lutheran

In 1522, in his “Admonition Against Insurrection,” Luther said, “I ask that my name be left silent and people not call themselves Lutheran, but rather Christians. Who is Luther? The doctrine is not mine. I have been crucified for no one. St. Paul in 1 Cor. 3:4-5 would not suffer that the Christians should call themselves of Paul or of Peter, but Christian. How should I, a poor stinking bag of worms, become so that the children of Christ are named with my unholy name? It should not be dear friends. Let us extinguish all factious names and be called Christians whose doctrine we have.”

Many know Luther’s final written words, “We are beggars. This is true,” were scribbled on a slip of paper that was found in his pocket when he died. If Luther was an expert in anything, it was this. He knew, very well, his place before God. More than that, he knew that God had more to give to His beggars than Luther could even imagine. This is what the Reformation – and Luther’s life – was all about. We beggars have nothing to give to God, but only have hands to receive His gifts. Of course, the more modest someone is, the more we want to honor them.

So here we are.

So Luther wins – he gets what he wants anyway. Because of his faithful work five centuries ago, we are firmly planted in God’s Word. We may be called “Lutherans” but we define ourselves quite precisely as people who proclaim Christ crucified and risen, nothing more, nothing less.

And those last words? They’ve become our words as well.

If Lutherans are anything, they’re the joyful recipients of Christ’s gifts of Word and Sacrament. For all of this, we’re thankful.