The Reformation Explained in Plain Language 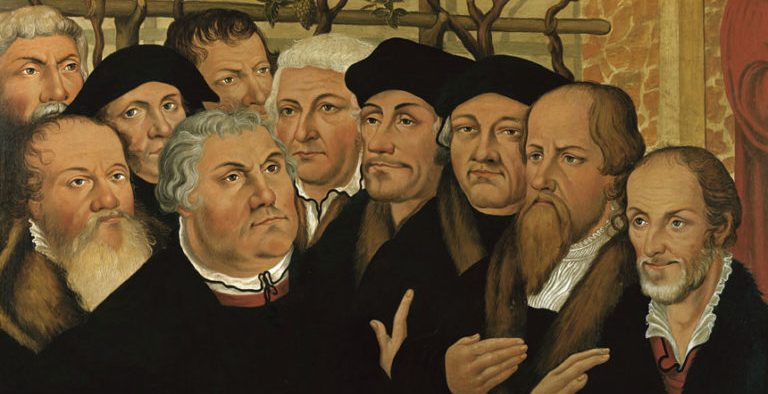 What is it about an obscure 16th century Augustinian monk in a small German town that deserves international attention, celebration and recognition?

After all, the Roman Catholic Church called Dr. Martin Luther a “wild boar in the church’s vineyard.”

The town of Wittenberg, on the other hand, looks more favorably upon the monk. Wittenberg is where Luther nailed his famous 95 Theses, setting in motion cataclysmic religious, political, cultural and social changes across Europe.

When the town celebrated the 500th anniversary of the Reformation in 2017, Luther was at the center of it all.

If you walked into any shop and you could buy Luther noodles, Luther beer and a Luther Playmobile. You could even bake a Luther cake.

As essential as Luther is, the Reformation actually begins with another man, Albert of Brandenburg.

Albert wanted the prestige and power that went along with being a bishop—but he was too young. Being a man of wealth, he met with Pope Leo X, and the two struck a deal. If he paid the pope 10,000 ducats, Albert could have not one, but three bishoprics.

Albert had the money, but not in cash. So, he hired John Tetzel, a Roman Catholic friar and preacher, to raise the funds by selling indulgences.

An indulgence was a promise that the pope could declare you forgiven of your sins so your time in Purgatory was either cut short or eliminated (if you paid enough).

Luther saw grave problems with this practice. The first of the 95 Theses stated, “The life of the Christian is one of repentance.”

The key here is that Luther did not base his argument on the Vulgate, which was the Latin version of the Bible the Catholics used. Instead, he worked from a version of the New Testament written in Greek, the original language.

This is important. Luther was saying that the Roman Catholic Church had gotten it wrong all those centuries.

The Vulgate translated the phrase “do penance,” thus laying upon man the burden of saving his soul from hell. This unnecessarily tormented man.

Luther, through the 95 Theses, and then subsequent books, pamphlets and sermons, pointed out that the Bible actually taught that no one could ever earn God’s forgiveness—whether through good works or purchase of an indulgence. Forgiveness was found in Christ’s finished work on the cross alone, a gift we received through faith alone by God’s grace alone as taught in the Scriptures alone.

In truth, the real hero of the Reformation was not Luther, but the Word of God.

While the matter of our justification was the ultimate question, how one defended their answer was based on who or what they viewed as an authority. Was it the popes of Rome? The early church fathers? Tradition? The Bible? Or a combination of all the above?

Luther and the Reformers argued it was the Bible alone—sola scriptura. Why? Because the popes, the early church fathers and tradition were all inconsistent and prone to error.

“The church,” Luther said, “does not make the Word, but it is made by the Word.” If it was true that the Bible was the final judge of faith and doctrine, then Luther reasoned that everyone—not just clergy—had the right to read and study it.

This meant the Bible, all sermons and all hymns should be clear, straightforward and understandable. Luther went on to translate the Bible into the plain language of his people, which was German.

Eventually, the beliefs responsible for the uniquely Lutheran faith, firmly rooted in Scripture, were collected and organized in a series of easy-to-read confessions. The most important confession was The Augsburg Confession (written by Phillip Melanchthon).

In fact, 1530, the year the Augsburg Confession was presented to the Holy Roman Emperor, should be just as important to Lutherans as Reformation Day.