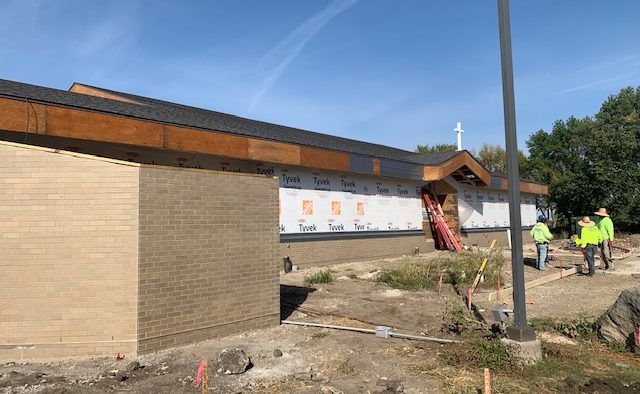 Waiting is the hardest part. Even for a church like Faith Lutheran in Adel, Iowa, it takes great patience to wait on God’s timing. They had a project in mind for years, but it wasn’t until after a few false starts that their plans really began to come to fruition.

Randy Pingel, president of the congregation, joined the church in 2008 when discussions about undertaking an expansion project first began.

“Faith is a smaller church,” he said, “and it has a good family-like feel. The people know each other, and it’s a very welcoming community. Even Adel itself is not a huge community – the town has grown, but it’s still small town. But our church is thriving. It’s not a dying church and so we’ve had lots of space constraints.”

Some of those space constraints are quite evident. For instance, the Sunday morning Bible study was taking place in the front narthex, between the two worship service times, because it was the only place that could accommodate the group. This meant that those coming in for the second service had to weave their way in and even snake through the kitchen to get to the bathrooms when needed.

“We knew the building needed a new roof and things like that, and all the meeting rooms were busy on Wednesdays and Sundays,” recalled Pingel. “We wanted more space for Bible studies and meetings for sure. Also, our church has a Harvest Dinner each year on the first Friday of November, and we invite the community in for a Thanksgiving meal. The church is just packed – people in classrooms, in the narthex, everywhere. Then there’s Easter and funerals … just not a lot of room.”

It seemed like the time was right in 2009, so the church took the first step in planning a renovation. They got to work and even got so far as presenting renderings to the congregation. But in 2012, it became apparent that this just wasn’t the time, so they put the project on hold until 2017.

Pingel, who started serving on the project committee in 2017, said that they “started talking about it again and pulling it off the shelf.”

“We got an architect, decided again what we wanted to do, and then…put the project back on hold again in 2018,” he said.

That year, the church decided to change their governance to better suit their structure, and even chose to ensure they had a balanced budget before continuing with the process.

“We went through a lot of change,” explained Pingel. “We’d been operating at a deficit, so we needed to overhaul it, go to a fiscal budget, and we turned it all around and have been operating in the black ever since.”

There were yet more changes coming in 2018 for the congregation, too. They hired a new preschool director and revamped the preschool programs – no small feat. Still, even though there were some great reasons to shelve the renovation project over the years, the back and forth caused a measure of hurt in the congregation.

Finally, in May 2019, the discussions about restarting the project began once more. The church voted to launch a capital campaign with Lutheran Church Extension Fund’s (LCEF) guidance. But was the timing right?

“We decided to move forward in faith, honoring the past and building the future,” shared Pingel. “We did not have 100% finalized architectural plans at the time, but we ran the campaign, hoping that it would offer us a litmus test as to whether we should keep spending money on this project. On commitment Sunday in December 2019, there was around $1.1 million pledged.”

Nearly a year later, in November 2020, the project committee brought forward the architect’s plans, and the congregation voted to move forward. For real this time. The renovations would include a 7,000 sq. ft. addition, a brand new, redesigned front entry, bathroom remodels, a complete re-roofing and updates to the exterior of the building.

“With the new space, we’re hoping to allow people more time to socialize and fellowship and not feel like they have to rush out of the church,” explained Pingel. “Plus, as a community, our hope is that we’ll be able to have more community functions and potentially allow outside community groups to use the facility for meetings, and since gym space is tight in our community, there’s a potential to invite those groups in, too.”

Pingel said that using the new space for the community turned out to be a significant focus for the project, turning their eyes to how they might use the facility to serve their neighbors who aren’t yet part of their fellowship.

“It’s not just about what Faith needs, but what the community needs,” he added.

Of course, community needs ramped up in 2020 when COVID-19 came on the scene, and some may have worried that the pandemic would put a stop to their plans once again. Interestingly, it did no such thing. At a time when it seemed everything was coming to a halt, Faith Lutheran was still moving forward in faith with their long-awaited project, and it all seemed to be coming together in ways that they couldn’t have imagined.

There were obstacles, like having to scale back a bit due to material costs and the stepping down of the church’s senior pastor in 2020, but Pingel said that it’s “amazing we’re doing it considering all the potential things going on in the world today.” Thankfully, they weren’t alone, and in fact, they had LCEF as a partner who not only provided the construction loan, but who would walk alongside them the whole way.

“Carole [White] and Mark [Frith] have helped us so much through this project,” mentioned Pingel. “We could’ve gone to someone else for a capital campaign, but they would not have had the Christ-centered focus that Mark was able to bring to the campaign. Their background and experiences of working with other churches and firsthand knowledge and advice about what works and what doesn’t work, they took all of that and helped us figure out what’s unique about Faith. They helped us think through how the campaign and project can be focused to fit our needs.”

“The members of Faith have been anticipating this project for years and are so excited to see the many ways they can impact their rapidly growing community through the use of this wonderful fellowship space, their enhanced preschool and welcoming entry and access to their church,” White added.

With a project fully underway and set to complete in December 2021, Faith Lutheran looks forward to hosting the community in their newly renovated space as early as the new year. While the timing for all of this may not have been what they’d originally planned, the members of Faith have found it true that God’s timing is always the best timing.

“There had been a lot of frustration over the years, disappointments, people that were really excited only to be told a couple of times that we had to put it on hold,” said Pingel. “But I think this time around, it’s meant to be. Things are just falling into place. We’re so excited to see it all come to fruition after all this time.”

Tags:
Previous Article
A Small School Teaching About a Big Truth
Next Article
Hoping For The Future, Building On The Past